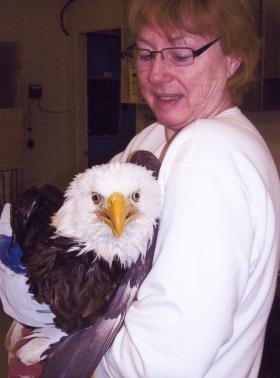 Victoria Rodgers is a South Okanagan artist who lives south of Okanagan Falls on Vaseux Lake.  The lake is a federal migratory bird sanctuary that was established for trumpeter swans and it is surrounded by a national wildlife area.  She also worked in a rehab centre for raptors in the South Okanagan which gave her insight into the many ecological concerns unique to this area and the wildlife and birds that inhabit it.

She grew up in Kelowna and won an art award in Toronto in high school. Her career path led her to receive an Instructor’s Certificate from UBC and she taught office administration in a college.

It was living in Golden and surrounded by some of BC’s most beautiful parks that influenced her and she started painting again. Watching wildlife in its natural habitat became her hiking and skiing goal, but learning the skills to enable her to photograph and paint them has been a long  journey. Learning how to catch and hold an eagle has also been a long journey.   She has attended courses in wildlife art, flower/botanical painting, watercolor, Chinese watercolor techniques, oil, encaustic, acrylic and  “inscape” painting in watercolor.

She has completed studio courses and plein air classes with some of  the Canada’s prominent .artists including Mike Svob, David Langevin, Dominik Modlinski, and John Pryce. She also attended the plein air FCA painting course on Saltspring Island with instructors Elizabeth Wiltzen, John Salminen, Carla O’Conner, and Stephen Quiller.  Wildlife artist Guy Coombes from Africa was also one of her instructors.

She attended a residency at the Toni Onley Artists’ Project with mentors  Jeffrey J. Spalding and Anong M. Beam and was in several galleries in  Penticton, BC.